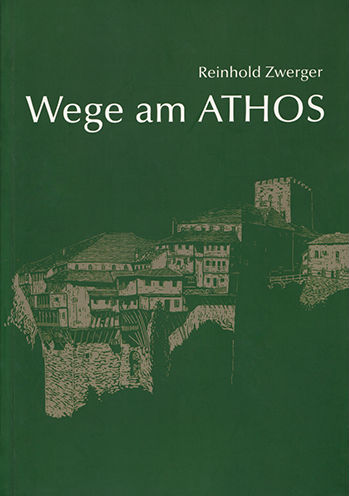 Over half a century ago - in 1956 - Reinhold Zwerger set foot on the Holy Mountain for the first time. He often spent weeks on Athos, not as a tourist
or even truly as a pilgrim but rather always with specific intentions:
he documented the layout of the Athos monasteries; he drew and sketched;
in some monasteries he gave lessons on the techniques of lino-cutting and
hand printing.

Reinhold Zwerger kept diaries, as far as his time allowed. The present book "Wege am ATHOS" (Footpaths on ATHOS) grew out of these diaries and his memories. In 1956 Athos really was still a place that had barely changed
since the Middle Ages. Constantly striving for objectivity, Reinhold Zwerger, an excellent observer, depicted the changes on the Holy Mountain between 1956 and 2005. He described the monasteries, told tales of his meetings with monks and reported on his - sometimes curious - experiences. As a keen hiker, he described the splendid landscapes and commented on encounters with other Athos hikers.

His enthusiasm for nature eventually lead to trying to preserve the old Athos trails. The initial idea came at the end of the 80s after an old footpath was destroyed by the building of a road:

"By this time I had already seen some destruction of the trails on Athos;
I found the obliteration of the beautiful old Lavra path particularly upsetting. The thought occurred to me that, irrevocably, I would never again cross over the old bridge."

Quote from Reinhold Zwerger, p. 32 of "Wege am ATHOS"

His ideas became more concrete at the end of 1989: Reinhold Zwerger wrote
a questionnaire which he sent to 50 friends of Athos, asking whether they themselves were ready to put work into preserving the trails and to help with the financing of this undertaking. This letter reached the hands of Prince Sadruddin Aga Khan. The Prince, taken by the idea, agreed to donate $1000 annually for upkeep of the paths.

Reinhold Zwerger created the "100 Ast-Scheren für den heiligen Berg" campaign ("100 pruning sheers for the Holy Mountain"), a technical and organisational challenge which he conquered with his enthusiasm and through the personal idealism of many helpers. Reinhold Zwerger spent around eight years in unceasing commitment to preserve the old footpaths.

The journalist and friend of Athos Heinz Nußbaumer writes:

"The Holy Mountain of the Orthodox World has been written about so often (too often?), both knowledgeably and in ignorance, yet with this account of these formative aspects of his life, Reinhold Zwerger has proved that
it is possible to write a completely different book, abounding with rich experiences."