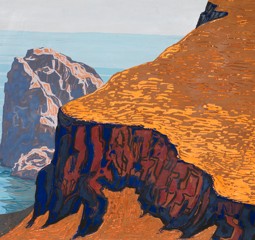 Linocuts in black and white

Proximity and distance in the art of Reinhold Zwerger

Trees, rocks, sea, sky – these are the central themes in the paintings of Reinhold Zwerger. The landscapes are archaic, empty of people, devoid of history. Where terraces are visible it is unclear whether they are the product of thousands of years of erosion, whether humans created and farmed them, or whether they are trails trodden and grazed by animals. Silence and solitude characterise his paintings. The painter's highly individualistic gaze has created a cosmos that defies any attempt to locate the pictures in time. They could be hundreds of years old or completely new. Perhaps it is their very timelessness that fascinates the viewer, who is not reliant on art history or analysis but can give him or herself over entirely to their own personal response. The rocks and ravines seem not so much a representation of reality as signs of transformation. Art arises from calm observation and deep insight. The landscapes are familiar and yet aloof, they refuse intimacy, they keep to themselves and remain as mysterious in their form as in their colours, striking yet harmonious. The colours reflect the light on the rocks and in the ravines, but they are restrained rather than radiant, as if a light veil of mist or smoke lies over everything, muting the colours.

Reinhold Zwerger was a graphic designer by profession, but his longing to paint eventually grew too strong. In the wild, rugged, empty landscapes of southern Italy he could give free reign to this longing. Since he was under no pressure from the art scene, or, worse still, the art market, painting was his own private endeavour and he could commit himself freely and unreservedly to each picture.

For his early works – whose principal subject was Mount Athos – he primarily employed a strictly black–and–white classical scraping technique and his works are among the most impressive 20th century instances of its use. In his gouaches, by contrast, Zwerger makes full use of colour. The pictures have a convincing simplicity, straightforward and subtle. Coupled with a sharp–eyed concentration and an alluring emphasis on light and shade, they give the landscape depth and clarity.

Reinhold Zwerger never gave up graphic art altogether. Building on his black–and–white works on scraperboard from the 1970s, he began creating linocuts, also in black–and–white. From 1977 to 2000 he used a complicated printing process to produce coloured linocuts which might be described as graphic translations of his painted landscapes. There is, however, one significant difference. While his gouaches were (until about 1980) always taken directly from nature, the linocuts were created entirely in his studio in a work process that was not so much a matter of observation as of concentrated thought.

He seems to have no artistic influences, either in the history of art, or in the personalities of previous artists. He never subscribed to any particular style but rather discovered and developed for himself what he wanted to convey as an artist. In the significance they give to detail, Zwerger's paintings are somewhat reminiscent of Jugendstil and its floral motifs, with its equal emphasis on both foreground and background and its adherence to nature's own particular rhythms. Reinhold Zwerger rises to this fascinating

challenge in his own pictures. His concern is the landscape directly in front of him and he shifts our gaze from the foreground into the distance where the hills vanish into haze and nature's dramatic side bursts forth in wild rock formations, as if the rock itself were being whipped by winter storms. Zwerger creates the rhythm and drama of his landscapes' structure by patiently encircling areas that follow the formations of hills and fields, that are decorative but also capture the unique texture of southern Italy, making tangible the shimmering light of hot summer days.

They are very personal pictures, only rarely displayed at a small number of exhibitions, but they represent the best tradition of landscape painting. It has become slightly old–fashioned to pick up an easel and walk out into the countryside to paint what one sees. Yet modern art began when artists abandoned their stuffy studios for Barbizon, Fontainebleau forest and the fields around Paris, when their personal impressions became more important than the fall of classical draperies, when they found the light in situ.

Reinhold Zwerger returned to this tradition a hundred years later. Like them, he picked up his portfolio with his chalk–primed cardboards, his pencils and paints, went into the countryside and climbed up into the loneliness and silence of the mountains. He looked out over the sweep of the landscape into the ravines, overgrown with bushes and thorns, and saw the sea far below him. Here he must have found what he was searching for – nature, untouched and elemental. Here was the mystery he wanted to pursue in his paintings, here was the place where he could be at one with nature and with art.

Angelica Bäumer is an arts journalist, author and exhibitions curator.

Read the words by Lisbeth Zwerger