"Gardener, graphic designer, advertising director and painter." In an interview with A. Korab (design austria) in 2007, Reinhold Zwerger said that he had had many different careers over the years and that his concentration and passion had belonged to all of them equally, and often simultaneously. Together they formed a creative universe whose individual elements inspired and cross–fertilised each other.

A studio under the sky

From the late 1950s onwards, Reinhold Zwerger painted landscapes – from life. His blue fabric folder was his constant companion on his travels. It held his cardboard canvases primed with chalk, while his gouache paints, his brushes, knives, drinking water and other practical utensils were carried in his rucksack. He first started exploring South Italy and Sicily in 1951. He loved the bold colours of the rugged southern landscapes and the quality of the light. The sea held a particular fascination for him. He painted currents, eddies, reflections and the motion of the waves in countless variations. In Austria he prized above all the gentle landscapes of Burgenland, the bare woods, the hedges and the vineyards in winter.

In the 1960s, Zwerger employed an unusual technique for some of his gouaches. He would layer colours over a large area of chalk–primed cardboard and then scrape them off with a knife to expose the layers beneath.Treating the surface of the painting with a scraper blade created local textures, planes and patterns. These textures came to form his distinctive artistic signature. Even after he abandoned the scraping technique in the 1970s and restricted himself to painting, his landscapes continued to exhibit a similar graphic style in their depiction of the natural world. Viewed from a short distance, the rhythmic lines, full of life yet positioned with great precision, create the effect of eddies or interlacing branches.These gouaches also exhibit a characteristic compositional structure, expansive and often brightly–coloured, with broad surfaces given depth by a progression of grey and blue tones.

Colour is the most important element in Reinhold Zwerger's depictions of rural landscapes, but in almost all his depictions of buildings and urban landscapes he restricts himself to black and white. These pictures employ a classic scraping technique. Scraperboards are primed with chalk and covered with black printing ink. The black top layer is scraped away with a knife so that white lines, planes and textures become visible. Every "scrape" has to be perfectly placed because corrections are effectively impossible. Exposing the white lines and planes creates an intensely dramatic effect. The buildings appear to be irradiated with a bright white light, giving the impression of a nocturnal scene. Zwerger created his first black–and–white scraperboard works in the late 1950s. In the 1970s, on his trips to Mount Athos, he also began to use this technique for "portraits" of the monasteries there.

Reinhold Zwerger was, one might say, a "manic creative". The design work in his day jobs – first as a graphic designer, then as chief designer for EUMIG – was not enough to satisfy him. There were summers when he painted a new painting every day, but he was also a passionate craftsman who made all sorts of others things – glove puppets for his two little daughters, crib mobiles for friends, or hand–painted Easter eggs.

In the mid–1960s Zwerger's development as a painter took a decisive turn when he started experimenting with linocuts. Linoleum was invented by the English chemist Frederick Walton. The new material, developed in 1860, was initially used to produce resilient flooring. At the end of the 19th century the idea of using it for printing was born and the linocut came into being. Unlike woodcuts, printing with linoleum sheets leaves no imprint of a grain. The technique has been used by many artists, including Gabriele Münter, Pablo Picasso and Henri Matisse. Zwerger first learned to print at the School of Graphic Design in Vienna where he worked on wood engravings. Later, in the 1950s, he used this technique to produce bookplates and greeting cards. He first began experimenting with linocut in the 1960s, initially as a method of printing on silk, where his favoured motifs were bare trees and ornamental patterns. In the 1970s, he began cutting the black–and–white Athos scraperboard pictures onto linoleum sheets and printing them on Japanese paper. Scraperboard and linocut are very similar processes. Both use knives, both produce sharp contrasts between black and white, and in both the artist needs a steady hand and a clear vision, as a single misplaced line will destroy the entire work.

Reinhold Zwerger's colour linocuts, all of which were created between 1977 and 2000, were generally based on his gouache paintings from the 1960s and 70s. His aim, ambitiously, was to recreate the original paintings as exactly as possible using print techniques, a goal which he achieved to a quite astonishing extent. 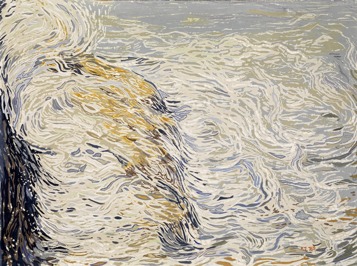 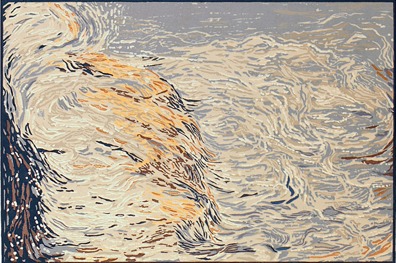 The creation of a colour linocut begins in the mind. The artist decides how many colours will be needed, which colour tones to use and what order to print them in. This planning stage is fundamentally the most important part of the work, although preparing and printing the plates also demands great dexterity and precision. Zwerger's speciality was extremely accurate printing with several different colour plates. For a single sheet, he would print between 10 and 20 plates on top of one another. In one instance, he used 38. It took him approximately a month to produce one print. He did his cutting and printing in his studio in Vienna's Second District. The printed sheets – usually produced in runs of 30 – were hung out with clothes pegs to dry. 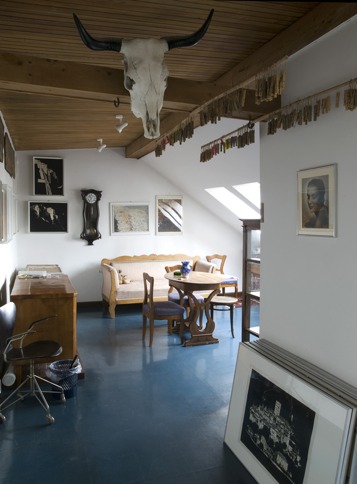 Zwerger's Mount Athos prints in particular were very well received. They were most recently displayed at a joint exhibition at Klosterneuburg monastery under the title "Austrian Artists and Mount Athos" in the summer of 2010. Reinhold Zwerger continued to work on linocuts and prints until 2000. Thereafter he turned his attention to writing, until his death in 2009. His book "Walks on Mount Athos" was published in 2005.

Read the words by Angelica Bäumer